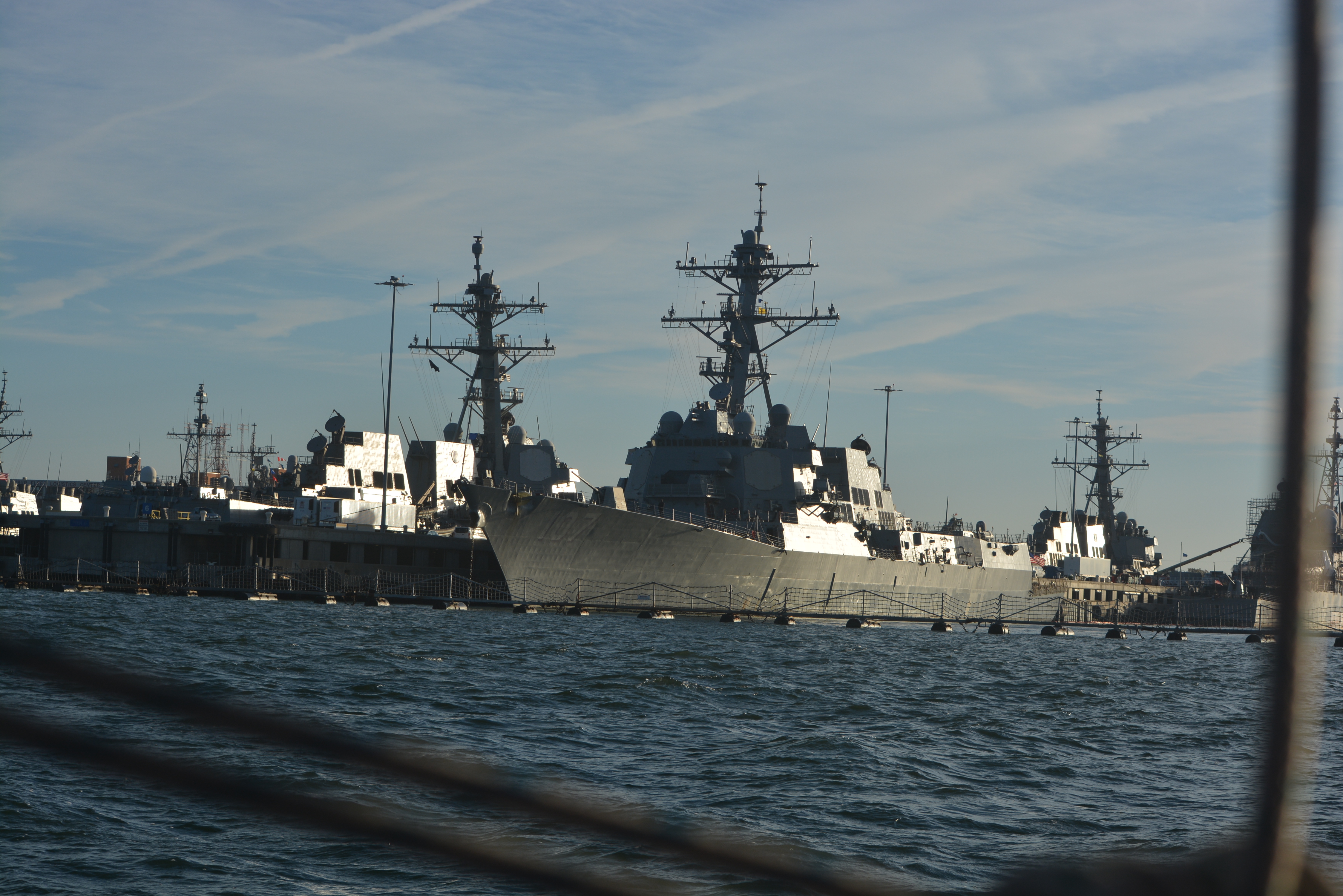 MC and Frank Something Unusual 15 November 2022

Finally, we started to see cacti and palm trees as far North as Norfolk.  On our walk from Willoughby Bay to the nearest grocery store, we were happily surprised to see them.  It gave us hope that we were going in the right direction - towards the heat.  We were amazed to switch from tuques and wool socks in Cape May to shorts and t-shirts in Norfolk.

Norfolk is quite an eye-opener as to the extent of American Navy Force, the world's largest naval station.  Even before we entered Chesapeake Bay, all boats nearby were warned off the entrance due to submarine traffic. We didn't see the submarine entering the bay;  but we saw another one exiting the bay.  I included a picture in the photo page of this site.  We had to stay at least 500 yards from it.  It was a first for me!  At Willoughby Bay, there was a lot of Navy air traffic:  helicopters and jets.  It was not a quiet stay but it was exciting.  The Willoughby Marina has a very good seafood restaurant, not fancy, reasonable prices, tasty food, $5 margaritas on Tuesdays.

At Cape May, we caught up with our good friends, Steve and Judi.  So much pleasure to see them again!  We were able to share a meal there then travelled to Norfolk together.  We had so much to talk about.  When we decided to leave, they stayed behind for some boat maintenance and catch up with other friends.

On our way out of the city via the Intercoastal Waterway (ICW), we bordered multiple piers, almost all of them taken by huge destroyers and aircraft carriers.  Little navy roundabouts with armed soldiers on board slowly cruised along the shore to ensure no one approached, let alone entered, any pier.  Some of the piers were even gated.  Amazing!

At this time of year, with risks of storms and hurricanes, we believe that the ICW is the way to travel South.  The Norfolk-to-Beaufort leg is narrow (shallows just outside the waterway), sinuous and the surrounding landscape is boring (swamps);  so extra vigilance at the helm is required.  As we should, we kept to our starboard as we traveled the waterway to allow space on our portside for many passing vessels.  However, once (only), Komeekha was at the edge of the waterway when we felt a bump.  We didn't have time to look at the depth sounder and realise what was really happening (an animal or a stump?) when we felt a bigger bump, the boat slightly titling and slowing down.  Oh Sh....t!  We very quickly steered towards the middle of the channel and increased the speed to avoid getting stuck!

One of the rivers we followed is called Alligator River.  Even though the water is now warm, we wouldn't venture a long swim in it.  LOL!

Talking about being stuck (or almost), we were recommended to purchase a tow service in case we need it on the ICW.  We bought the service of TowboatUS at US$200.  Without it, a tow could cost about US$750. It's like an insurance policy, it's worth the peace of mind.  In some instances, as we've seen in anchorages, some sailboats anchored in shallow waters during high tide.  The result is touching bottom and the boat leaning about 30 degrees for many hours while waiting for high tide again and move off the shallows.  No tow required.

Yesterday, as we neared Mile Hammock Bay - our next anchorage, we saw a warning on Navionics about an extending shoal around the next bend, the last one before the bay entrance.  This means the water will be shallower than the charts.  A large motorboat was anchored in the middle of the channel a few hundred yards before the bend.  The owner explained that he was waiting for high tide to continue.  We decided to try it, going at a very slow speed, ready to back up if it was getting to shallow, Frank steering and me telling him the depth changes as we progressed.  Our draft is 4.9' (where the keel ends).  We usually are comfortable up to 6' clearance.  Passing this bend, the depth sounder showed as little as 6.0'.  For us, we squeezed our cheeks (the bottom ones), can't hold our breaths for that long, until we pass the shallows.  Ouf!  We did it!

Subtropical storm Nicole will hit Florida tomorrow.  As we are North of Nicole's worst temper tantrum (we're near Jacksonville, NC), it'll have a lesser impact on Komeekha than Fiona had last month.  We will get winds up to 21 kts and gusts up to 36 kts as per Windy, one of the wind application we use.  At Mile Hammock Bay, we have good wave protection but we are near the ocean.  To prepare, we're putting out 125' of ancre chain.  We're in 10 feet of water therefore the ratio chain to water depth is plenty.  Furthermore, we're adding a second ancre.  That should do the job to keep us safe until we sail again on Saturday. 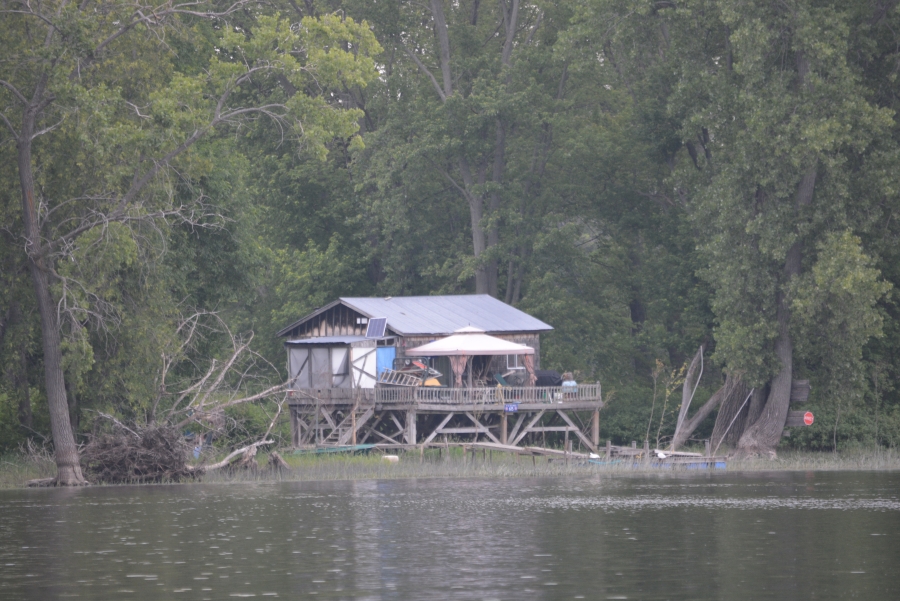 A BAYOU WITHOUT CROCODILES

July 6
A few days ago, as we were planning our next overnight stops, we saw this vast area dotted with islands and mini channels - a recipe for a perfect anchorage:  wild, quiet, mud bottom, kayak potential.

Here's a contradiction - sort of:  when we left Wingfield Bassin (45 nautical miles South of our current location) at 5:00am yesterday, the water temperature was at 11.8 degrees celcius. 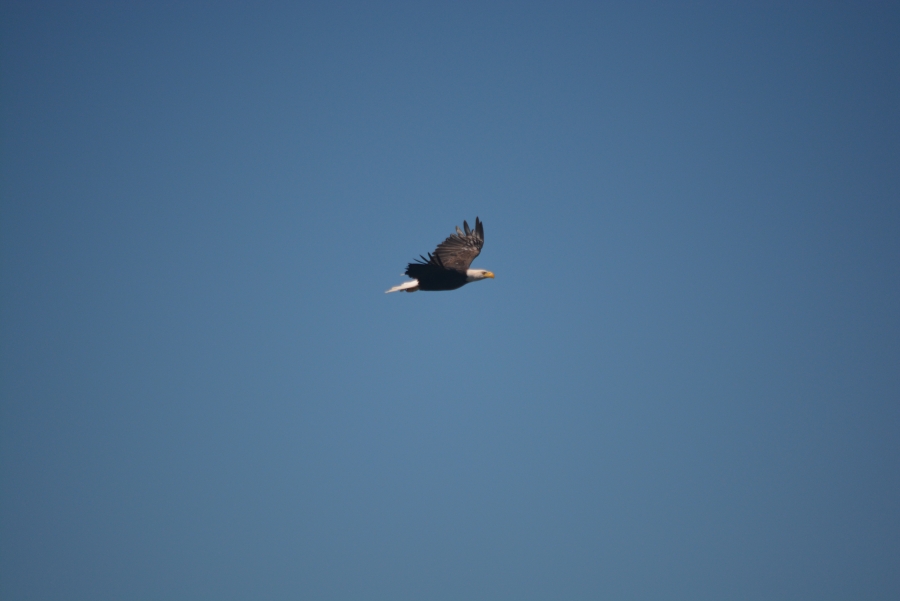 We are presently in a bay between East and West Rouse Islands, just West of Little Current.  One morning, we see this bald eagle flying over us to a tall tree.  It starts calling its mate